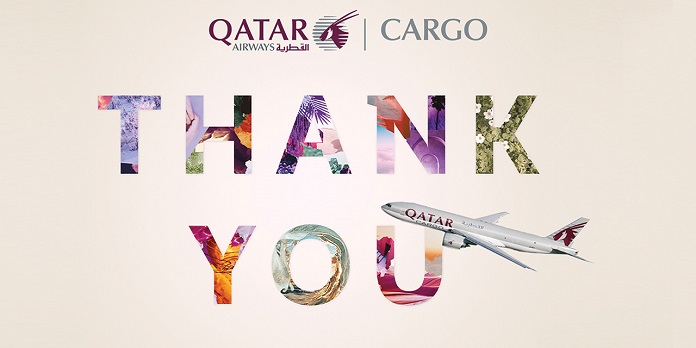 Qatar Airways Cargo looks back on a successful year in all areas of its business, thanks to the commitment and contributions from its customers and employees

“As 2021 draws to an end, Qatar Airways Cargo looks back on another eventful year. The American author and activist, Sharon Weil sums up the experience of the past 12-19 months best: ‘Navigating change is the new stability’. Qatar Airways Cargo has forged ahead with its strategic focus on growth, sustainability, and digitalisation in the face of uncertainty, and we are thankful to also draw our stability from the support our dedicated customers and employees have shown and continue to show on a daily basis. We know that Qatar Airways Cargo would not be able to navigate the many challenges and changes in our industry so successfully without you. For this, we thank you”,Guillaume Halleux, Chief Officer Cargo of Qatar Airways Cargo, extends his appreciation in corporate communication.

The year in figures

So far, more than 500,000 tonnes of medical cargo have flown on board of Qatar Airways Cargo since the start of the pandemic. Among these, 500 million COVID-19 vaccines were transported throughout its network, out of which more than 72 million doses were flown under UNICEF’s COVAX programme, Qatar Airways Cargo signed a Memorandum of Understanding with UNICEF in February this year, covering 5 years of vaccine transport support.

In July, Qatar Airways Cargo became a member both of Pharma.Aero as well as the Cool Chain Association, in its endeavour to collaborate in defining the highest standards in the shipment of valuable pharma goods and ensuring sustainability in transportation by avoiding integrity deviations leading to medical or food wastage.

All other products also saw positive growth in 2021, as the Qatar Airways passenger network began to resume operations once more to previously suspended destinations.

The year began with a world premiere, as Qatar Airways Cargo took delivery of three brand new Boeing 777 freighters on a single day, bringing its total freighter fleet to count to 34freighters: two Boeing 747-8 freighters, 26 Boeing 777 freighters, and six B777-300ER mini freighters.  Services to Saudi Arabia were resumed in January, for the first time since 2017, and Qatar Airways Cargo soon appointed General Sales Agents in the Kingdom of Saudi Arabia, the United Arab Emirates, and the Arab Republic of Egypt.

In October, it increased its presence across Central Eastern Europe with the appointment of a new GSSA for Bulgaria, Croatia, Czech Republic, Hungary, Romania, Serbia, Slovakia, and Slovenia.Qatar Airways Cargo served over 60 freighter destinations in 2021, and together with Qatar Airways’ passenger or belly-hold cargo network of over 140 destinations, the airline welcomed new destinations to the network this year, Almaty in Kazakhstan and Odesa in Ukraine being the most recent new destinations launched.

Investments in our future

Sustainability comes in many forms. In February, the second chapter of Qatar Airways Cargo’s WeQare sustainability programme “Rewild the Planet”, was launched, and in May a moving film tribute depicted the incredible journey of seven rescued lions from Ukraine to South Africa. Not only is Qatar Airways Cargo currently planning the next complex and emotionally intense “Rewild the Planet” move, but it is also preparing to launch Chapter 3 of WeQare. More details will be disclosed early next year.

Qatar Airways Cargo underwent extensive digital enhancement during the year. In January, together with CHAMP Cargosystems and Agility, it completed the first phase of the IATA ONE Record pilot to showcase the initiative’s benefits and feasibility of defining a common API (Application Programming Interface) for all electronic platforms in use along the entire supply chain:

This aims to standardise air cargo data exchange protocol for better data quality, control, transparency, and ease of connectivity. In a similar vein, in March, IATA launched its Enhanced Partner Identification and Connectivity (EPIC) platform to support the digitisation of the global air cargo supply chain. Qatar Airways Cargo provided key input during the project’s pilot phase and meanwhile, 32 airlines, 94 freight forwarders, and other industry stakeholders have joined the growing community which will eventually bring about the total digital transformation of the industry.

Throughout the first half of the year, Qatar Airways Cargo rolled out its capacities on the Freightos WebCargo third party eBooking platform, first across a few selected countries in February, then throughout the European region in June, followed by the United States of America. in July, and finally the rest of the world in August, offering customers a real-time pricing and booking platform.Also in February, Qatar Airways Cargo became a premium member of Validaide, enabling its customers to make informed decisions on selecting the optimum routing for their time and temperature-sensitive pharma shipments. Later, in August, Qatar Airways Cargo and WiseTech Global implemented a direct data connection to extend CargoWise’s direct airline integrations and improve digital data interaction.

“Digitalisation will continue to be a core focus in 2022 since it is a major enabler in ensuring quality, speed, efficiency, excellent customer service, and flight safety. The latter will be further supported by our Unit Load Device (ULD) fleet rollover to Safran’s new, Fire Resistant Containers. We will continue to invest in the quality of our products, in our unrelenting push for the highest quality standards in our industry, and will continue to collaborate with our customers, partners, and staff, to deliver true value to the market. For us at Qatar Airways Cargo, it is not enough to be the largest cargo airline; our mission is to be the world’s best cargo airline” Guillaume Halleux, Chief Officer Cargo of Qatar Airways Cargo, outlines.

What we do, we do for you. And what we do, we cannot do without you. Thank you to all our customers and employees for your commitment and invaluable contributions towards supporting Qatar Airways Cargo in its mission to be the world’s best cargo airline!