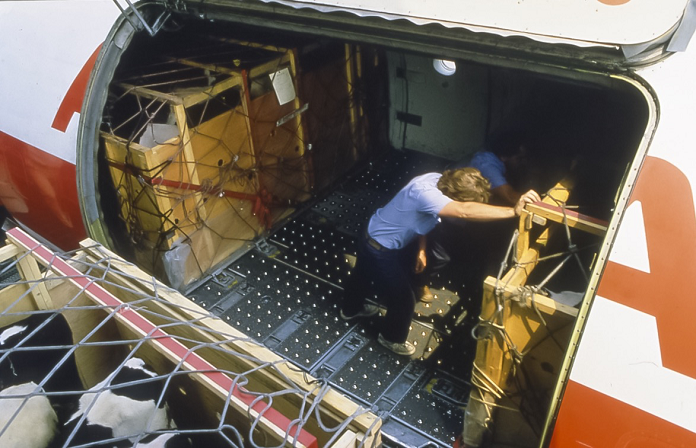 Air Canada has welcomed the first of its converted Boeing 767-300ER aircraft for Air Canada Cargo into its fleet, marking a return to freighters for the airline, which has a long history of transporting goods around the world.

When Trans-Canada Air Lines (TCA) carried its very first group of passengers from Vancouver to Seattle on September 1, 1937, the bags of mail on board represented the beginning of Air Canada Cargo.

In 1943, TCA was contracted to carry mail, cargo, and passengers from Montreal to Scotland, with a stopover in Reykjavik. Its inaugural transatlantic cargo flight carried four tonnes of priority goods.

By 1946, the airline was handling cargo under two lines of service: “Air Express” for small shipments and “Air Freight” for bulk shipments of a specified minimum weight. The business potential of cargo motivated TCA to create a Freight Development Bureau, which introduced a third “Air Cargo” service – and gave Canadian retailers, manufacturers, and distributors reliable access to transcontinental air freight capacity for the first time.

TCA also commissioned freighters, including a Bristol 170, Mark 31 for an all-cargo route between Montreal, Toronto, and New York. Three of these aircraft were in service from 1953 to 1955, but unfortunately had the shortest career of any aircraft in the TCA fleet because they weren’t competitive enough for transcontinental cargo business.

When TCA rebranded as Air Canada on New Year’s Day in 1965, freight traffic was still climbing and, in addition to acquiring new freighters, the company doubled the size of its Toronto cargo hub. Today, the Toronto facility is undergoing a renovationExternal site that may not meet accessibility guidelines. that will reinforce its role as the cornerstone of our modern global cargo network.

Over the next few years, Air Canada purchased three 727-100 freighters, as well as two Boeing 747 Combis, to provide capacity for both main deck freight and passenger service.

In the 1980s, Air Canada’s most distinctive cargo livery to date was painted on its DC-8-73Fs. These freighters remained in service until the 1990s when Air Canada removed its five remaining DC-8 freighters from service. This marked the end of Air Canada Cargo’s domestic freighter network after 34 years of flying the DC-8s.

Around this same period, standardized unit load devices (ULDs) for cargo were introduced for widebody passenger aircraft, including the Boeing 767s, as well as on the narrowbody Airbus A320s in the fleet. Utilizing ULDs added the equivalent capacity of four DC-8 freighters to Air Canada’s network.

Fast forward to 2021, Air Canada Cargo is Canada’s largest provider of air cargo services as measured by cargo capacity, with a presence in over 50 countries and hubs in Montreal, Toronto, Vancouver, Chicago, London, and Frankfurt. During the COVID-19 pandemic, Air Canada temporarily converted several Boeing 777 and Airbus A330 aircraft by removing the passenger seats and allowing for additional cargo to be loaded in the cabin. Air Canada is also one of only a handful of passenger carriers worldwide to ever record over $1 billion in annual revenue from its cargo portfolio, which connects hundreds of destinations across five continents using Air Canada’s domestic and international passenger flights, as well as through cargo-only flight options.

In addition to welcoming newly converted Boeing 767-300ER freighters, Air Canada Cargo is expanding and diversifying to include a number of new services, including Rivo, an emerging presence in the online retail sector. Air Canada Cargo also has a unique partnership with Drone Delivery Canada to help commercialize their technology.