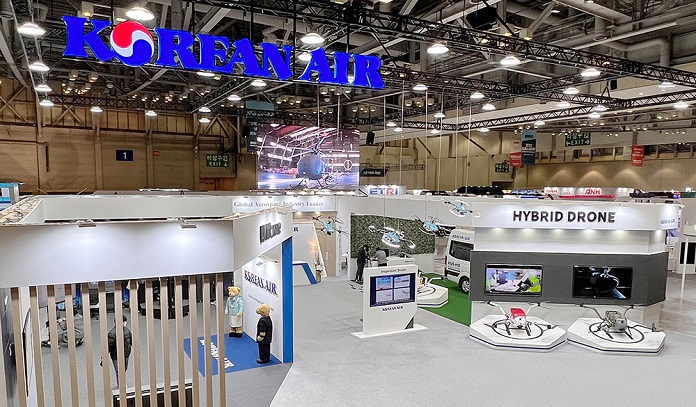 Drone Show Korea 2022 kicked off in Busan to showcase the latest innovations of major South Korean aviation and defense firms, offering a glimpse into future drones that will become available in daily lives in a few years ahead.

During the three-day event held at Bexco in Busan, LIG Nex1, a local defense firm that specializes in missiles, unveiled KCD-200, a drone that can transport payloads heavier than 200 kilograms.

KCD-200, which looks like a small airplane, is supported by seven propellers and capable of vertical take-off. LIG Nex1 plans to complete the development of KCD-200 in 2025 and utilize it as a logistics drone in the military as well as urban air mobility to pick up and drop off passengers in the cities.

Korean Air also displayed a transportation drone that can fly at the speed of 150 kilometers per hour and carry payloads of 250 kilograms. The drone is set for completion in 2026. The drone will be a hybrid drone, meaning that it won’t be powered 100 percent by eco-friendly power sources such as batteries or hydrogen.

At the event, SK E&S, the energy unit of South Korean conglomerate SK Group, displayed a drone powered by liquid hydrogen. The drone recently set a world record by flying for 13 hours and 24 minutes. SK E&S aims to register the record on Guinness World Records. The longest drone operation, so far, was 12 hours and 7 minutes.

“The drone is powered by liquid hydrogen, which is chilled at minus 253 degrees Celsius. Liquid hydrogen can store a great amount of energy, and this allows the drone to fly 26 times longer than those powered by lithium-ion batteries,” a company official said.

SK E&S plans to deploy liquid hydrogen drones to conduct safety checks on facilities that are dangerous for human workers such as gas pipelines, solar panels, and wind farms.

Korea Aerospace Industries, the nation’s sole aircraft developer, grabbed the attention of visitors with a “metaverse” training program where pilots can engage in simulations with a drone squad.

5 things to celebrate about Delta Cargo’s DASH on its 50th...