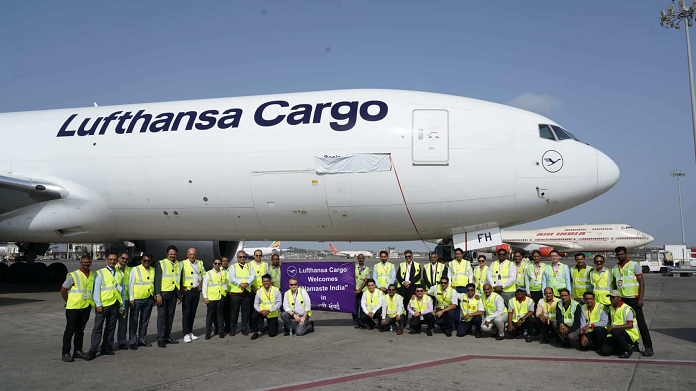 Recognition of the decades of cargo connections between India and Germany | Increased flight and cargo capacity to Bengaluru, Chennai, Delhi and Mumbai since March

Following the guiding principle “Say hello around the world,” Lufthansa Cargo has been naming its aircraft after its main markets within its global route network since 2013. The respectful greeting “Namaste India,” which is widespread in Hindu culture, symbolizes the close connection that exists between Lufthansa Cargo and India.

The cargo airline has a long-standing connection with customers in the Indian air cargo industry since 1959 and grew further with its freighter operations since the 1970s. Lufthansa Cargo has continuously expanded its connections and capacities. Currently, Mumbai alone is served four times a week, Bengaluru and Chennai twice weekly from Frankfurt with B777F freighters. In addition, there are further cargo capacities in the passenger aircraft from Frankfurt and Munich to Bengaluru, Chennai, Delhi, and Mumbai.

In 2021, Lufthansa Cargo transported close to 65,000 tons of cargo from and to India. In 2019 (pre-Covid), the annual overall volume of transported cargo to and from India was above 108,000 tons, using its full capacities.

“For decades, Lufthansa Cargo has been an important and reliable partner in and for India. I am extremely pleased to personally mark this partnership and success story in the context of this freighter naming ceremony in my home city. It is our goal to continue connecting India with other markets around the world and to support the strong development of the Indian economy.

On a positive note, since the reopening of Indian airspace for commercial passenger flights in March 2022, we have more than tripled the number of passenger flights. From ten weekly passenger flights, we now offer a total of 32 weekly connections. At the same time, we increased to four weekly freighter flights to Mumbai and thus considerably offer more options for our customers to transport their goods with the flexibility, reliability, and quality that Lufthansa Cargo is known for. And there will more to come,” emphasizes Ashwin Bhat, Chief Commercial Officer at Lufthansa Cargo.

Similar to all 15 aircraft in the Lufthansa Cargo fleet, the twin-engine Boeing 777F “Namaste India” (D-ALFH) is highly fuel-efficient and thus makes an important contribution to lowering CO2 emissions. In addition, this aircraft type meets the strict requirements of ICAO Annex 16, Volume I, Chapter 14 in terms of noise protection.