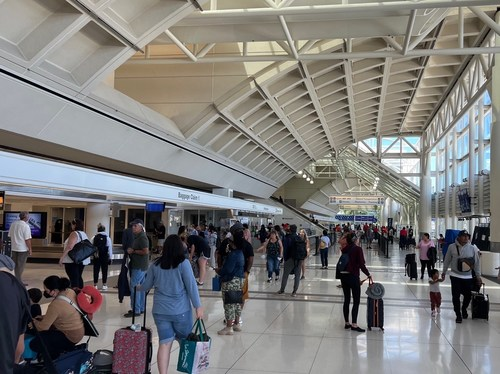 Nearly 517,000 air travelers flew into or out of ONT during the month, 10.15% more than the same month in 2019. It marked the fifth consecutive month in which passenger volumes exceeded a half million, and moved Ontario closer to a possible 6 million passengers by year’s end. The September total also represented a 6,000-passenger increase over August – typically a peak month for air travel.

“Ontario International continues to prove itself as the airport of choice for millions of Southern Californians. The double-digit increase in passenger volume last month reinforces the important role we play in meeting the air travel needs of one of the most robust population and economic centers in the country,” said Alan D. Wapner, president of the Ontario International Airport Authority (OIAA) Board of Commissioners and Mayor pro Tem of City of Ontario.

Through the first nine months of the year, ONT welcomed 4.2 million passengers – 3.6% more than the same period in 2019 and 37.6% above last year. At this pace, the airport should well exceed the 5.6 million passengers who flew into or out of ONT in 2019 – the last full year before the pandemic. According to Ontario’s seat capacity projections for the next six months, nonstop flights are expected to increase by 1.6% over the October 2019-March 2020 time period, nonstop seat capacity is projected to rise by 7.9%, and available seat miles (ASMs) are projected to increase by 11.4%.

This continues an impressive trend that began with the airport’s return to local ownership in 2016. During those first three years – before COVID-19 disrupted air travel globally – ONT experienced a nearly 33% increase in passenger volumes.

“We’ve been able to pick up where we left off before the pandemic, increasing flights and destinations and providing travelers with amenities and a customer experience they won’t get anywhere else,” said Atif Elkadi, OIAA CEO.

The September numbers also underscored Ontario’s role as a global logistics hub. Shipments of air cargo totaled more than 70,000 tons during the month, 14.4% higher than the same month in 2019. Last month’s tonnage was essentially flat when compared with September a year ago.

“Ontario International cargo shipments showed strong growth in September and on a year-to-date basis compared with 2019 as our shipping partners continued to show confidence in our airport as a commercial hub for Southern California,” said Ron Loveridge, vice president of the OIAA board.

The efforts made by Liege Airport for the environment are recognized...