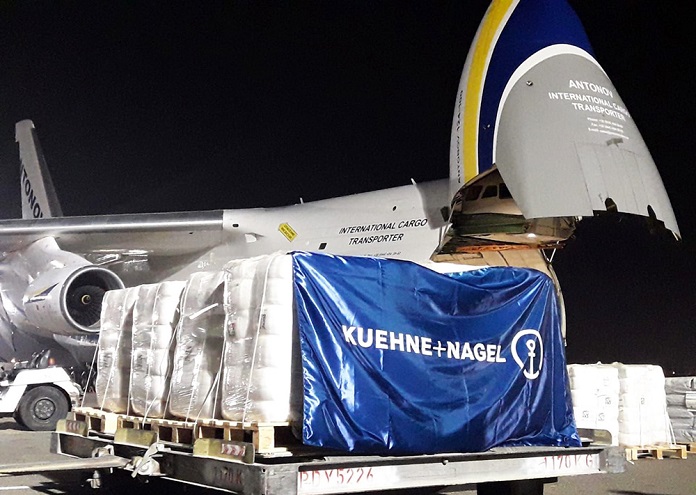 After Kuehne+Nagel announced its pledge to offer emergency aid to Ukraine worth 10 million Swiss francs in the form of logistics services, the Emergency & Relief Logistics team in Copenhagen (Denmark) partnered with large humanitarian aid organizations to quickly set up critical aid missions funded by this donation.

The largest charter yet took off in Sharjah (United Arab Emirates) on March 29. A Ukrainian Antonov An-124, one of the biggest cargo aircraft in the world, carried 111 tonnes of aid sourced from UNICEF’s warehouse in Dubai and landed in Poland the same evening. The goods will then be trucked to Ukraine.

Jean-Cédric Meeùs, Chief of Global Transport, UNICEF Supply Division,  comments: “Right now, this is the fastest-growing humanitarian crisis in the world and the speed of our response is critical. As Ukrainian airspace remains closed, this donated charter flight enables us to ship massive volumes of life-saving supplies in a matter of hours to Poland for onward transport into Ukraine.”

Dr. Detlef Trefzger, CEO, Kuehne+Nagel International AG, says: “Thanks to our long-standing, trusted partnership with UNICEF, we were able to very quickly set up a critical aid campaign for Ukraine in a joint manner. It is symbolic in itself that today we can make one of the largest deliveries of aid to Ukraine with a Ukrainian Antonov airplane. I am grateful to our partners, stakeholders, and all our Kuehne+Nagel colleagues who support our pledge to the Ukrainian people.”

Colleagues across Kuehne+Nagel rally to support Ukrainians through initiatives in offices and warehouses around the globe. Numerous customers have relied on our teams to transport donations.