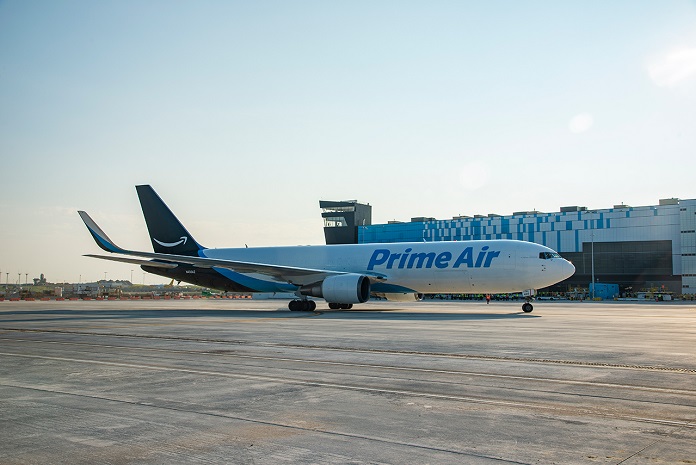 Operations begin at the Amazon Air Hub at the Cincinnati/Northern Kentucky International Airport. The facility–a $1.5 billion investment in Northern Kentucky–serves as the central U.S. hub for Amazon’s air cargo network and will create thousands of jobs over time.

Amazon has announced the beginning of Amazon Air Hub operations at the Cincinnati/Northern Kentucky International Airport (CVG). After more than four years of planning and construction, the Amazon Air Hub will serve as the central hub for Amazon Air’s U.S. cargo network, facilitating the rapid transport of customer packages across the country.

This $1.5 billion investment in Northern Kentucky will eventually create thousands of jobs for people from various backgrounds, including load planning, management of package sortation, and robotics technology. All regular, full-time employees will have access to Amazon’s industry-leading wages of up to $19.50 per hour; comprehensive benefits including medical, vision, and dental; and a 401(k) beginning on day one.

“CVG is proud to be home to Amazon Air’s primary U.S. air cargo hub”
~ Tweet this

“Wonderful communities and diverse teams like this are the heart and soul of our operations,” said Vice President of Amazon Global Air Sarah Rhoads. “We’re excited to get rolling in Northern Kentucky, and we’re thrilled to employ thousands of fantastic people from the area in this next-generation, highly sophisticated facility that will connect our air cargo network for years to come.”

The 800,000-square-foot sortation building sits on an over 600-acre campus that features seven buildings, an expansive new ramp for aircraft parking, and a multi-story vehicle parking structure. The sortation facility is equipped with the innovative use of robotics technology that helps move and sort packages—including robotic arms and mobile drive units that transport packages across the building—miles of interlinked conveyors, and ergonomic workstations that support a comfortable work environment for employees. The building will also feature a solar rooftop scheduled for installation over the next year, and all energy generated from the panels will feed directly into the electrical grid of the local community.

Across the coming years, Amazon Air will help attract more manufacturers, service providers, and tech companies to Kentucky seeking to take similar advantage of our key geographic location. Congratulations and thanks to Amazon for this monumental investment in our state and workforce. We look forward to continuing the commonwealth’s longstanding and successful partnership with Amazon for decades to come.”

“CVG is proud to be home to Amazon Air’s primary U.S. air cargo hub,” said Chief Executive Officer of Cincinnati/Northern Kentucky International Airport Candace McGraw. “We’ve worked hard to ensure our airport is a great place to do business, and we couldn’t be more pleased to partner with Amazon on the transformational impact this hub is having and will continue to have on our local economy well into the future, from job creation to innovation and increased connection to the country.”

Amazon Air continues to expand globally to meet the needs of its growing customer base while investing in jobs and sustainable solutions to power its network. Amazon Air has expanded its presence in the U.S. to more than 40 locations and launched its European air hub in 2020 at Germany’s Leipzig/Halle Airport. Amazon Air has also purchased six million gallons of sustainable aviation fuel and invested in leading-edge electric ground service equipment.

Amazon has invested in the region for many years; the most recent investment is a state-of-the-art diagnostics laboratory in Hebron, Kentucky, that processed millions of COVID-19 tests for front-line employees and recently expanded testing capability to support customers. Amazon has created more than 18,000 jobs in Kentucky since 2010 and invested more than $20 billion across the state, both in infrastructure and compensation for local employees.

These investments have contributed an additional $18 billion to the Kentucky economy and have helped create over 49,000 indirect jobs on top of Amazon’s direct hires—from jobs in construction and logistics to professional services.

Amazon also announced in July a commitment to hiring over 100,000 U.S. veterans and military spouses by 2024 and has pledged to invest over $700 million to provide upskilling training for 100,000 U.S. employees for in-demand jobs across the company’s corporate offices, tech hubs, fulfillment centers, retail stores, and transportation network, or even to pursue career paths in high-demand fields outside of Amazon.

Caribbean Airlines Cargo Ramps up capacity for the Holidays