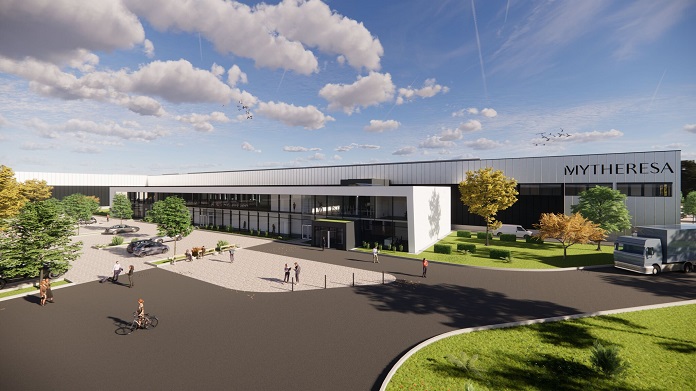 Commercial property developer Intaurus said proximity to the international cargo hub was the key to selecting it as the base for the new 55,000 sqm facility

The e-commerce platform for luxury fashion Mytheresa has announced that it’ll be opening an on-airport logistics centre at Leipzig/Halle Airport (LEJ) in Germany.

The facility will be the e-commerce fashion company’s second in addition to its headquarters in Munich.

The airport said “proximity to the international cargo hub at Leipzig/Halle was the key to selecting the new base”, noting that the move is likely to create about 500 new jobs in the south-west of Leipzig/Halle Airport by the middle of 2023 and the figure may rise to as many as 1,000 at a later date.

Sebastian Dietzmann, COO of Mytheresa said: “We are very pleased to be able to serve customers around the world and here in Germany even more efficiently and quickly with thanks to the new logistics centre directly at the airport in Leipzig. This is another logical step for the growth and globalisation of Mytheresa. We can further improve our service level and the associated customer satisfaction while maintaining high quality standards.”

Commercial property developer Intaurus took over a 105,700 sqm plot from Flughafen Leipzig/Halle Airport and will start constructing a modern logistics building with 55,000 square metres of usable space right next to the airport at the beginning of 2022.

Oliver Raigel, Managing Director of the Intaurus group, said: “In order to support Mytheresa in its growth, we’ve been inspecting and pre-selecting the best sites across Germany, in addition to our and their home market in Munich. One central requirement for Mytheresa has been proximity to a cargo airport with international operations. As a result, the plot of land right next to Leipzig/Halle Airport was the most favourable proposition.”

Götz Ahmelmann, CEO of Leipzig/Halle Airport operator Mitteldeutsche Flughafen, commented: “We’ve managed to successfully attract another innovative and dynamically growing e-commerce company to Leipzig/Halle Airport. This fits ideally with our strategy of becoming the leading logistics region in Europe. We’re the central focus and driving force in this region. Our airport is versatile and it’s booming. We’re providing growth momentum for the whole of Central Germany.”

While those ambitions may appear lofty, the airport has grown consistently and strongly for the last 15 years, since DHL Express chose it to be its main global air hub. And LEJ has increasingly proven an attractive base for e-commerce shippers, with Amazon choosing it as its first European air hub.

Following more than a decade of consistent cargo growth that had seen it expand to become established as Germany’s second-busiest and Europe’s fifth-largest cargo airport, LEJ last year saw the volume of freight handled increase by 11.7% to more than 1.38 million tonnes in 2020, a new record high.

And the airport is on course for another double-digit percentage growth increase this year, with its annual freight volume already exceeding the 1 million tonne mark by August.

The airport believes LEJ’s freight volumes this year “will significantly exceed the record that we set last year of approximately 1.38 million tonnes”, adding: “Freight volumes are increasing at more than 10% and the figure was about 15% in August. We are therefore expecting a figure higher than 1.5 million tonnes for 2021. This development makes us very optimistic about 2022 too.”

Brussels Airport: positive cargo growth for the third month in a...