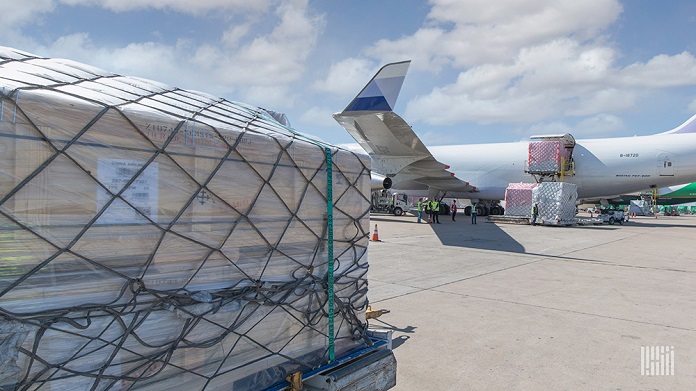 The war in Ukraine, sanctions on Russia, and stepped-up COVID lockdowns in China caused the air cargo market to contract in March and macroeconomic clouds could further dampen a sector that has performed well during a chaotic pandemic, according to new analyses.

The impact is being felt in freight rates, which are quickly climbing as capacity disappears faster than demand.

Clive Data Services, independent airfreight benchmarking service owned by Xenata, reported Wednesday that shipment volumes declined 6.5% last month compared to the pre-COVID level in 2019 and were 4.5% lower than a year ago. Meanwhile, available cargo space on aircraft shrank 4% year-over-year and is now 14% less than before the pandemic.

Clive Data said it identified a 20% drop in Europe-to-Northeast Asia capacity during the first few weeks following the Russian invasion. Lufthansa Cargo officials estimate a 10% reduction in air cargo capacity because airlines must fly extra hours around Russia, carry more fuel that displaces cargo, or make a fuel stop. The International Air Transport Association measured a 17% fall in the number of dedicated cargo flights between Asia and Europe during late March versus the same period a year ago.

And logistics companies in China say the citywide lockdowns of Shanghai, Kunshan, and other areas have made it nearly impossible for the air logistics system to function. Shanghai Pudong International Airport is technically open, but few special licenses are being issued for truckers to enter airport property and no shipments can be released or delivered. Factory production has plummeted. Passenger and cargo airlines have canceled thousands of flights, with Delta Air Lines suspending cargo handling there through April 18.

The city of Shenzhen was under isolation protocols for more than a week in March. China’s restrictions on trucks crossing to the mainland from Hong Kong and local quarantine requirements for Cathay Pacific pilots have crippled cargo activity at the city’s air cargo hub.

Clive, which captures data from a large sample of widebody passenger and all-cargo aircraft, said cargo holds on average are two-thirds full, the same level as three years ago but 6 points lower than in March 2021.

Xenata’s rate index shows rates remain about 2.5 times higher than in March 2019 and 27% higher than a year ago.

Clive Data said more airlines are selling spare capacity in the short-term spot market, especially in high-demand regions such as Asia. Spot rates and spot market share versus space sold at contract rates, for example, continued to rise on the Europe-Japan trade lane. Spot rates from Japan climbed in the last week of March to about $5.47 per kilogram, nearly 50% higher than in the weeks preceding the Ukraine war. And the amount of capacity being sold at spot rates increased to nearly 60% or 20 points higher than the spot share in early February.

The North Atlantic market is showing considerable strength. The load factor, or percentage of occupied cargo space, in March was 83%, only 5 points lower than the record in March 2021. The modest decrease in the load factor despite a 40% increase in year-over-year capacity reflects a 25% increase in volumes from Europe to North America, according to Clive.

Air cargo volumes have been boosted for more than a year by businesses converting ocean shipments to air because of systemic inefficiencies and backlogs precipitated by the pandemic. Much of the diversion has been on the main trade lanes of Asia to the U.S. and Europe, but the same trend appears to be happening in the trans-Atlantic. East Coast ports are experiencing extremely low vessel reliability and mounting congestion as companies try to avoid bigger logjams on the U.S. West Coast. Vessels are arriving an average of 9.5 days late, according to Xeneta.

Demand for air freight in Europe is increasing as companies look to air transport to ensure adequate inventory stocks for the summer and fall, third-party logistics provider Flexport said in its weekly market update. The freighter deficit means shippers have to wait 10 to 14 days from the time of booking until cargo gets on a flight, especially on popular trade lanes. Cheaper options are available to secondary European hubs where airlines have regular passenger flights, it said.

Meanwhile, the International Air Transport Association flagged several indicators for slower air cargo growth in its latest market performance report, which showed global demand in February was 11.9% greater than in 2019 and 2.9% more than the prior year.

During 2021, air cargo demand increased by 6.9% compared to pre-crisis levels.

IATA uses a different methodology than Clive that critics say doesn’t truly capture volumes because it uses distance rather than volumetric measurements as part of its formula. It also lags Clive by a month because it depends on airlines to report figures as opposed to using current transaction data.

The factory closures in Asia, sanctions, supply chain delays, and shortages of crucial inputs are driving prices higher — and economic activity and trade lower. The same shortages and shipping delays, however, are also why more companies are resorting to air transport.

Consumer inflation for G7 countries was 6.3% in February, the highest level in 40 years. Inflation typically reduces purchasing power for goods, but IATA economists said higher savings levels during the pandemic might change the pattern. A contraction in global export orders to the lowest level since July 2020 is another cautionary sign.

Inflation may already be dampening new export orders — a leading indicator of demand for air cargo shipments and strongly correlated with cargo-ton kilometers. In March, global export orders contracted to the lowest level since July 2020. IATA pointed to a noticeable deterioration in new export orders in Germany, China, Japan, and Korea.

Air cargo volumes could get a bump once mass quarantines in China end because warehouses and factories will try to make up for the downtime and pump out more exports. The surge in demand is likely to overwhelm the ability of airports and airlines to quickly process the cargo.

“Products that would’ve gone out on sea freight will now need to go out on expedited air freight,” said Bobby Solis, president of Asia and the U.K. for Omni Logistics, in an email message.

The February growth figures ticked up from January because manufacturing ramped up quickly in China after the Lunar New Year holiday while capacity benefited from an increased passenger flying as the omicron variant receded outside Asia and governments loosened travel restrictions.

Air travel rebounded in February from January but is still down 45.5% from the 2019 peak. International passenger volumes are only at 40% of the pre-pandemic level, according to IATA. The Ukraine crisis broke out too late in February to be reflected in IATA’s figures. Ticket sales point to a strong summer season. Still uncertain is whether inflation and lower consumer confidence tied to Ukraine war effects will slow the industry’s recovery. Airlines are raising fares to offset jet fuel prices, which have soared 77% this year, more than the price of crude oil.

Cargo space on international passenger flights increased 21.4% year-over-year in February, but gains are slowing as traffic normalizes. Overall, IATA said cargo capacity was 12.5% better in February than a year earlier, in line with the past four months, but remained tight, 5.6% below the 2019 level.

NE Asia-Europe capacity drops more than 20% due to the Ukraine crisis Air cargo capacity on the northeast Asia-Europe trade lane has dropped 22% since the end of February when the Russian invasion of Ukraine began, according to the latest figures from Accenture’s Seabury Consulting.

The consultant compared capacity on the trade between March 12-18 with February 19-25 as it has taken a few weeks for the industry to settle into a “new normal”.

Seabury said that cargo capacity declines are driven by European carriers, including Russian airlines, and integrators as they were forced to cancel and re-route flights at the start of the conflict due to sanctions. Taiwan’s China Airlines also made adjustments at an early stage.

Carriers that haven’t been affected included those from China as well as Ethiopian Airlines.

Meanwhile, global international cargo capacity between March 7 and 20 is down 5% compared with the same period in 2019.

Transpacific capacity is up 12% eastbound and 13% westbound and transatlantic is down 6%. Capacity from northeast Asia to Europe is 41% down from two years ago as capacity was already down around 10% before the Chinese New Year and has been further affected by the Ukraine crisis.