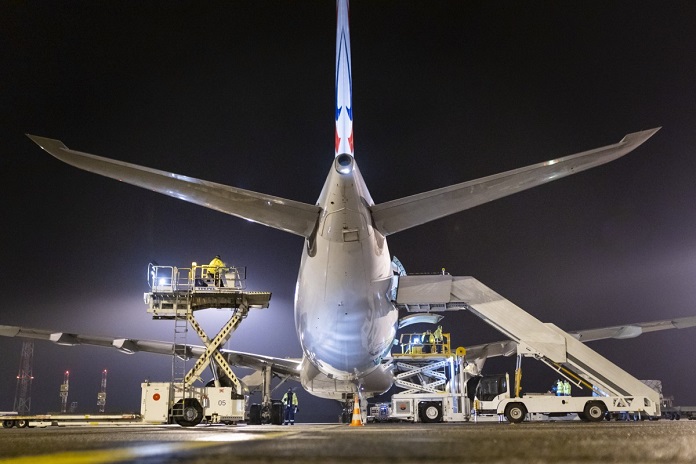 The airport handled 183 thousand tons of air cargo last year
2021 was a significant year for air cargo in many ways. The coronavirus pandemic and the changing logistics and e-commerce trends and expectations resulting from it have presented airports around the world with huge challenges. Budapest Airport’s timely decision to expand its cargo base at the end of 2019 has enabled it to meet the unexpected challenges of the pandemic, better than many competing airports.

Thanks to the airport operator’s long-standing strategic focus on air cargo as a priority segment, the airport took a giant step in 2021 to further strengthening its role as a leading regional hub, with all the related national economic, logistics and social benefits.

2021 was the strongest year ever in terms of cargo volume: Budapest Airport exceeded the dream threshold of 180 thousand tons. Among the major cargo airports in Central and Eastern Europe, Budapest Airport saw the largest increase in cargo volume compared to 2019, competing increasingly closely with the region’s leading airport, Vienna and even Munich.

Last year, practically every month brought new records in the cargo volume handled, and the airport ended the year with 183,362 tons of cargo, a 36.4% increase compared to 2020. In addition, this was achieved with only 4.8% growth in the number of cargo flights (this which is less than one1 extra cargo movement ATM – arriving or departing aircraft – per day), thanks to a renewed increase in belly cargo traffic and the higher capacity and better utilization of dedicated cargo flights.

Several factors contributed to cargo figures being outstanding even in the region. On the one hand, the pandemic changed logistics processes, as the safety and the speed of air cargo provided steady support to the country’s economy and competitiveness during the pandemic. On the other hand, also in the wake of the pandemic, the transformed e-commerce trends seem to be solidifying, with the number and volume of online orders reaching unprecedented levels worldwide in 2021. The majority of international e-commerce volume arrives in Hungary by air, further strengthening the airport’s role as a cargo hub.

Partly due to the aforementioned trends, partly thanks to the Hungarian government’s Chinese-Hungarian aerial Silk Road policy and as a result of the persistent core focus work of the Budapest Airport, air cargo traffic between China and Hungary has also reached new levels, contributing to the airport and the government’s ambition to make Hungary the freight transport, logistics and distribution hub of Central Europe.

In line with this, the airport operator also aims to ensure that as much of the goods arriving in Europe from the Far East as possible should reach their final destination via Budapest. This gateway role was reinforced last year by the Alibaba Group’s decision to choose Budapest as its Central and Eastern European air logistics hub, attracting other major cargo players to the Hungarian market.

Budapest Airport’s new cargo handling base covering tens of thousands of square meters, known as the Cargo City, played a key role in the fight against the pandemic last year. The vast majority of the tens of millions of doses of vaccines that arrived in the country did so through Budapest Airport, which also contributed to the airport’s cargo performance.

Chris Dinsdale, the CEO of Budapest Airport highlighted: “Our cargo developments will continue; Budapest Airport decided last year to further expand the BUD Cargo City, handed over two years ago, with preparatory works already under way and construction scheduled to start in 2022. The airport operator’s air cargo activities currently involve around 2000 direct jobs at the airport and a further 12 000 through the associated ecosystem. With the expansion planned in the coming years, the airport will further strengthen its role in the national economy and its ability to create jobs, and thus the country’s competitiveness as well.”

Budapest Airport closed its second year of operation under the heavy impact of the coronavirus. In the current environment impacted by the pandemic, passenger traffic still only reached one-third of its pre-pandemic level on an annual basis, while over half of its pre-pandemic level if we consider the past several months. In air freight, however, the volume of cargo soared to unprecedented records. Last year, Ferenc Liszt International Airport processed a total of 4,622,882 passengers and 183,362 tons of air cargo, an increase from 2020 of 20% and 36%, respectively.

In line with international trends, especially in Europe, Budapest Airport is gradually moving towards reaching the 2019 passenger traffic level. In the whole of 2021, airline capacities have been steadily recovering in Europe, with fewer and fewer aircraft parked on the ground. In line with the rules and, where appropriate, closures associated with the coronavirus pandemic in each country, airlines have responded flexibly, by restarting flights to existing destinations and, in many cases, by adding new destinations as well. It is clear that with the increase in vaccination coverage, the propensity and the opportunity to travel have returned, with most countries allowing free movement for those with the coronavirus vaccine.

2021 brought many new things at Budapest Airport, which had a much better year than in the first year of the coronavirus pandemic, 2020. Compared to 2020, the number of passengers using Budapest Airport increased by 20%, to 4 622 882. Remarkably, while in the first six months of the year, a total of 604,000 passengers passed through the airport, in the second six months of the year, 4,019,000 travellers used the airport, which means traffic increased sevenfold in the second half of the year.

This was due to the end of the third wave of the coronavirus, the easing of the restrictions imposed on account of the pandemic, the increase in vaccination coverage and the parallel increase in the propensity to travel. Overall, travel rules were much more relaxed and predictable last year than in 2020, and passengers have learned to live with the different protocols and safety measures required for travel, and have become increasingly confident in travelling, even to destinations further afield.

November was the busiest period in 2021, with nearly 730 000 passengers, while the airport recorded the lowest number of passengers in February, with 54 407. Last year, the busiest routes were London, Amsterdam and Paris, with 17% of passengers traveling on these flights.

As far as long-haul flights are concerned, Seoul, Dubai and Doha were stable features of Budapest Airport’s schedule last year. Flights to China, Canada and the United States are yet to resume; LOT announced late last year that its Budapest-New York service will resume in June 2022, and Budapest Airport is negotiating about several other long-haul flights, which will hopefully be included already in the summer schedule.

Balázs Bogáts, head of airline development for Budapest Airport, emphasized: “We set one important goal for 2021, to rebuild as many destinations as we possibly could. I consider last year a success in this respect, as we were able to reconnect to 80% of the cities from before the pandemic and added many new destinations, 18 to be precise, that were never available before.”

He added: “As Budapest and Hungary remain an attractive destination for foreign tourists and the rules in force in Hungary allow for flexible entry conditions, we have every reason to be optimistic for 2022. I am confident that we will be able to rebuild the remaining 20% of destinations this year, further enriching the list of cities accessible from Ferenc Liszt International Airport.”